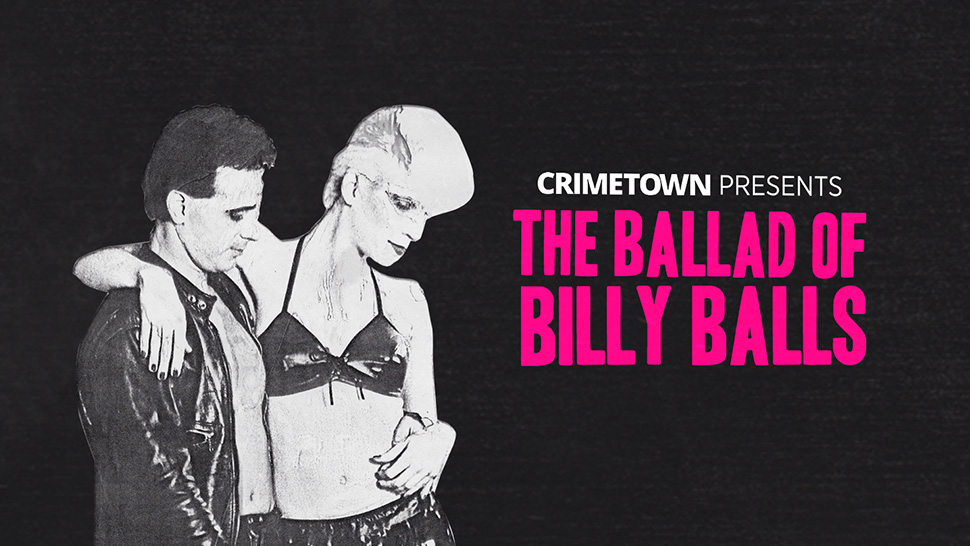 “Crimetown Presents: The Ballad of Billy Balls” explores the life and mysterious death of East Village punk rocker Billy Bills, killed thirty-seven years ago under suspicious circumstances and buried in an anonymous grave

Activist and writer iO Tillett Wright sets out to uncover the truth in weekly investigative series about love, loss, murder, and mystery in the raw, gritty New York City of the 1970s and 80s

Downtown New York, early summer, 1982. A man bursts into an East Village storefront apartment and shoots musician Billy Balls. The motive? Unknown. Billy’s body? It just disappears. Rebecca, Billy’s girlfriend, doesn’t know what to do and has no way to say goodbye.

In Crimetown Presents: The Ballad of Billy Balls, Wright goes searching for answers and unravels a mystery of love and loss, the tender binds of family, and the stories we learn to tell ourselves just to survive.

Crimetown Presents: The Ballad of Billy Balls launches on March 28, 2019 with Episodes One and Two on Apple Podcasts and wherever podcasts are available. Listen to the trailer, first two episodes, and subscribe to the series here: https://itunes.apple.com/us/podcast/the-ballad-of-billy-balls/id1391405921?mt=2.

In the late 1970s, Rebecca Wright was an actress pounding the streets of New York. In 1977, she met a musician named Billy Balls, and they fell deeply in love. For seven years, the two of them made love, music and art together in the East Village, until one day in the summer of 1982, Rebecca came home to find her windows blown out and Billy gone. Shot seven times without explanation, his body sat for ten days in Cabrini Hospital and then was mysteriously taken to an anonymous burial ground that she cannot find to this day. For thirty-four years, Rebecca has lived as a widow and to this day, has never said goodbye. Why was Billy disappeared? Was this a cover up? Who killed Billy Balls, and why?

“I would call it an experiment. To try to listen to a time and place many have never experienced,” said Marc Smerling. “We combined unique voices, music, and sound effects to bring the listener to a very emotional place. We want our audience to feel it.”

"It's a crime story, but it's more about love, loss, and the deep binds of family,” said Zac Stuart-Pontier. “‘The Ballad of Billy Balls’ may have the most heart of any podcast we’ve ever done.”

“This show is everything I’ve dreamed of,” said iO Tillett Wright. “True crime, no-bullshit storytelling, and a movie for your ears.”

“Marc Smerling and Zac Stuart-Pontier have raised the bar for investigative storytelling and continue to redefine the true crime genre in podcasting,” said Chris Corcoran, Chief Content Officer, Cadence13. “We are thrilled to continue our partnership with them for this intense, riveting story.”

iO Tillett Wright is an activist and writer and the author of the memoir Darling Days.

Growing up in New York City, Wright had an unorthodox upbringing where individuality and being different was actually the norm. Wright uses these experiences to inspire his photography, which centers on the differences and similarities between straight, gay and lesbian people. He explores the confusion of gender and defies the natural human tendency to categorize people into groups, even when they exist somewhere between. Wright's photography is regularly featured in the New York Times. He has published three limited edition books of photographs: Lose My Number, KISSER, and Look Ma', No Hands.

Download the cover for Crimetown Presents: The Ballad of Billy Balls here: https://we.tl/t-muvL4CwJQE.