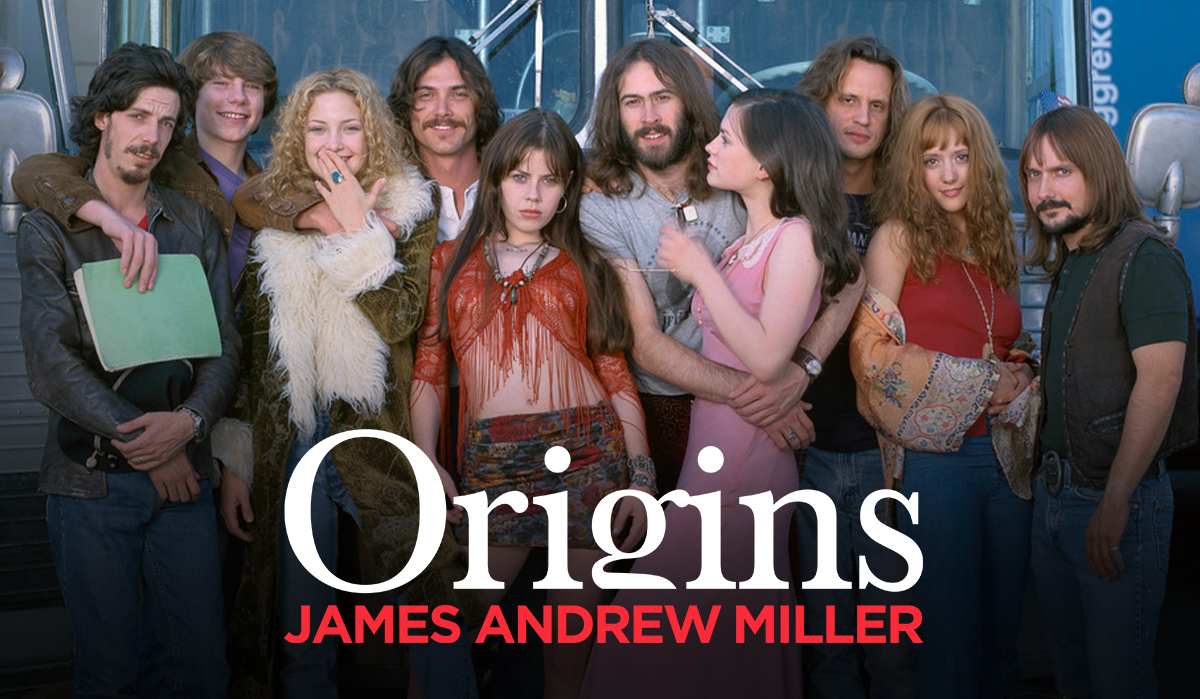 Join award-winning journalist and bestselling author and Origins host James Andrew Miller as he uncovers bold beginnings of success stories in the worlds of television, movies, sports, music, and business as told by the insiders who were there from the start, bringing listeners all the unpredictable moments, pivotal junctures, and those sheer strokes of luck that turn great ideas into even greater realities.

Origins is written and hosted by Miller, and executive produced by Chris Corcoran, Chief Content Officer, Cadence13, and Miller. Previous chapters of Origins have focused on Curb Your Enthusiasm, ESPN, Nick Saban and Alabama’s Crimson Tide, Saturday Night Live, and Sex and the City.

On Origins: Almost Famous Turns Twenty, Miller shares his revealing and intimate conversations with all of the film’s key players—writer/director Cameron Crowe stars Kate Hudson, Frances McDormand, Billy Crudup, Zooey Deschanel, Jimmy Fallon, Patrick Fugit, Jason Lee, artists Peter Frampton and Nancy Wilson, casting director Gail Levin, rock photographer Neal Preston and Pennie Trumbull, the real-life inspiration for Penny Lane— as they explore the making of the Oscar film based on Crowe’s early life. You’ll hear never before told stories from behind the cameras—and away from the set—and explore the movie’s cultural impact; its music; what the Almost Famous experience means to the cast and creative team, and how it changed their lives. Learn why the movie still resonates with millions of fans around the world twenty years after its initial release.

All five episodes of Origins: Almost Famous Turns Twenty will be available to binge on July 8, 2020, via Apple Podcasts, Spotify, RADIO.COM and everywhere podcasts are available. Listen to the trailer and subscribe to the series here: https://bit.ly/OriginsAF.

“Between his personable style, and the exhaustive research behind his wonderful questions, Jim Miller managed to summon all the spirit and emotion of ‘Almost Famous’ with the original cast,” says Cameron Crowe. “It’s a little bit of a magic trick. He put the band back together."

“I’ve loved ‘Almost Famous’ since Day One. It’s easy to argue this is one of the greatest films of the past quarter century, and it was on my Mt. Rushmore of movies to share with my daughter. What I wasn’t expecting, however, was that Cameron and the cast would—twenty years after the movie’s release—remember so much and be so keenly affected by the experience of making the film together,” said Jim Miller. “Their memories and deeply personal reflections were raw, and fans of the film will hear a great many new revealing anecdotes and candid observations from all of them. ‘Almost Famous’ is a national treasure, and I’m thrilled to launch this incredible new chapter of ‘Origins’ with my wonderful partners, Cadence13.”

“‘Almost Famous’ is a true classic—a beloved, iconic part of our culture whose impact on movie making, the careers of many stars, and rock and roll has been deep and wide,” says Chris Corcoran, Chief Content Officer, Cadence13. “There’s no better way to peel back the curtain and go behind the scenes for this nostalgic journey than with Jim Miller and our next chapter of ‘Origins.’”

James Andrew Miller is an award-winning journalist who has worked in politics, media, and entertainment in a career spanning more than 20 years. He is the #1 New York Times bestselling co-author of Those Guys Have All the Fun: Inside the World of ESPN and Live From New York: An Uncensored History of Saturday Night Live, which was named by Fortune as one of the top 75 “Smartest Books We Know.” His most recent book, Powerhouse: The Untold Story of Hollywood’s Creative Artists Agency, was also a New York Times best seller, and his next book is a comprehensive history of HBO.